Nintendo’s throwing the party of the year and everybody’s invited! Social Play Wii Party is a social experience for the entire family and beyond. By focusing on interactive group play that features Mii characters as the stars, Wii Party isn’t the life of the party…YOU are! All-New Experiences Wii Party introduces several new ways to

Nintendo’s throwing the party of the year and everybody’s invited! Social Play Wii Party is a social experience for the entire family and beyond. By focusing on interactive group play that features Mii characters as the stars, Wii Party isn’t the life of the party…YOU are! All-New Experiences Wii Party introduces several new ways to play that break the traditional party-game mold. These games change how players interact with each other by taking what’s on the TV screen and bringing the action out into the living room. From carefully passing the Wii Remote controller around like a time bomb, to searching for hidden Wii Remote controllers, these games turn Wii Party into a house party! Board Games and Beyond Wii Party features 13 unique party games that include interactive four-player board games, cooperative and competitive two-player games, familiar favorites like bingo, and over 80 mini games that feature all types of game play and motion control. With Mii characters front and center, there’s something for everyone…starring everyone!

Wii Party is a party game developed by Nintendo for the Wii gaming console. The game is an evolution in the party game genre, in which along with standard Wii party game action beloved by gamers, players use the Wii Remote in new ways that encourage player interaction in the physical gameplay space, affecting in-game action. The game features more than 70 party games, broken into multiple game categories, 1-4 player game support and new and fun ways to integrate Miis into your gameplay. 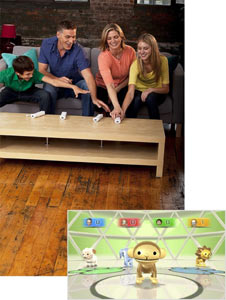 Utilize the Wii Remote in a whole new way with family and friends.
View larger.

An Electronic Game Board for the Whole Family

Most video games require players to focus their attention on a screen, but now Nintendo brings the action into the living room with Wii Party, a game that changes the way people interact with other players.

Wii Party is a family-friendly party game featuring 13 different party game modes and 70+ mini-games. Individual games are diverse in design, incorporate importable or system generated Miis, and fall into several different categories. These include: Party Games supporting 1-4 players that in some cases utilize an in-game game board, navigated with the use of Miis and dice rolls; Pair Games, supporting up to two players in co-op play; and House Party Games, which support 2-4 live players and utilize the Wii Remote to create differing dynamics between players.

Some of the 13 different party game modes take the fun out of the TV and into the living room. Players have to interact with one another in the real world to get the results they want in the game. Examples of House Party gameplay include: A take off on “Spoons”, in which players place their Wii Remotes on a table. Each one emits a different animal noise. Players win the round by being the first to grab the controller that is making the sound of the animal shown on the TV. Players use Wii Remote controllers to play Hide and Go Seek, where one player asks the other players to leave the room and then hides all of the controllers around the living room. When the other players return, they have to find them. Wii Party features multiplayer variety. Some of the party game modes are cooperative, such as “Balance Boat.” Others are competitive, such as “Board Game Island.” In Board Game Island mode, players help their Mii characters compete in more than 70 different mini-games: Mii characters ride a rollercoaster while players try to shoot down floating balloons containing gifts. Players use their Wii Remote controllers to help Mii characters navigate a virtual game of tag. For multiplayer modes, additional Wii Remote controllers are required and are sold separately. 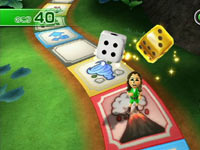 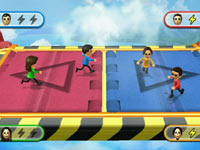 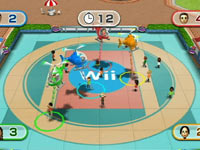 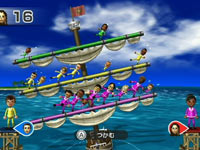