Journey through the undiscovered jungles of South America, in Up the video game. You can control Russell, Carl, Dug the talking dog and a female bird named Kevin, or you can play with a friend through the entire game. Aided by Russell¿s wilderness knowledge, the four characters must work together to navigate treacherous jungle terrain,

Journey through the undiscovered jungles of South America, in Up the video game. You can control Russell, Carl, Dug the talking dog and a female bird named Kevin, or you can play with a friend through the entire game. Aided by Russell¿s wilderness knowledge, the four characters must work together to navigate treacherous jungle terrain, combat exotic animals and avoid being captured. Each character has special abilities that help in their journey. During the game, you will explore exciting environments, overcome obstacles and battle beasts in an effort to stop Muntz from capturing Kevin. Based on the Disney – Pixar animated feature of the same name, Up The Video Game takes players on the Nintendo Wii on an exotic adventure with Carl Fredricksen and his young sidekick, Wilderness Explorer Russell, as they set off on a wild journey through the undiscovered jungles of South America. Players will be able to experience all four main characters from the movie — Carl, Russell, Dug the lovable dog or Kevin the prehistoric bird — and will enjoy the action both in a single player campaign and with friends via the game’s 2-4 player multiplayer support. .caption { font-family: Verdana, Helvetica neue, Arial, serif; font-size: 10px; font-weight: bold; font-style: italic; } ul.indent { list-style: inside disc; text-indent: -15px; } table.callout { font-family: verdana; font-size: 11px; line-height: 1. 3em; } td.vgoverview { height: 125px; background: #9DC4D8 url(https://images-na.ssl-images-amazon.com/images/G/01/electronics/detail-page/callout-bg.png) repeat-x; border-left: 1px solid #999999; border-right: 1px solid #999999; padding-left: 20px; padding-right: 20px; padding-bottom: 10px; width: 250px; font-family: verdana; font-size: 12px; } 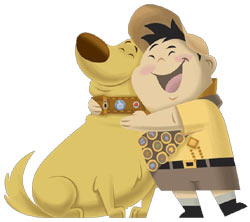 Play as your favorite characters from the movie.
View larger.

Join friends in multiplayer modes.
View larger. On this journey players will encounter exciting, new environments as they navigate through treacherous jungle terrains, battle dangerous creatures and trek the slippery slopes of the Amazonian Tepuis. In addition, the game also features several play modes and features. Unique Character Moves, Features and Game Levels
Designed to provide a gaming experience to match the spirit of the movie, Up the Video Game for Wii provides a wealth of enticing features including: character-specific moves, Wii motion-sensing controls, a tutorial system and 11 levels of gameplay across six environments. Playable Characters and Storyline

Carl
Carl Fredricksen is not your average hero. He’s a retired balloon salesman, who is forced to leave the house he and his wife built together. But instead of moving into an old folks home, Carl takes action. He ties thousands of balloons to the roof, lifts the house into the air and sets off for South America, fulfilling the promise he made to his wife years before. However, Carl’s plan is challenged by the discovery of a stowaway, the optimistic, overly eager Russell. Carl’s journey tests more than his patience when the duo must survive the extreme weather, treacherous terrain, and strange inhabitants of a lost world – as well as each other.

Russell
Russell is an enthusiastic and persistent 8-year-old Junior Wilderness Explorer. Armed with a backpack laden with gear, he is ready for the wilderness. The problem is that he’s never actually left the city. All his knowledge of the outdoors comes from books, and his sole camping experience was in his own living room. He’s just one “Assisting the Elderly” badge shy of achieving his lifetime goal: Senior Wilderness Explorer. When he targets Carl Fredricksen as the elder he will assist, Russell ends up as an unwitting stowaway on Carl’s porch when the house takes flight and finds himself on the true outdoor adventure he’s been dreaming about.

Kevin
Named “Kevin” by Russell, this extremely rare, 13-foot-tall flightless bird is hidden from the world in its remote Paradise Falls habitat. Kevin is exceptionally fast and nimble despite its size. In fact, the massive bird often gets into some very curious and seemingly impossible positions. Very few know that this scientifically valuable creature exists, but Carl and Russell stumble upon the bird, which Russell names Kevin after he discovers they share a sweet tooth. Kevin and Russell bond instantly, and despite the bird’s propensity to swallow Carl’s walker, Kevin joins the jungle’s most unlikely pack, along with Carl, Russell and Dug.

Dug
Dug is a lovable golden mutt living in the wilds of Paradise Falls as part of the dog pack searching for the rare, flightless bird. Like the rest of his pack, Dug is outfitted with a remarkable high-tech collar that translates his thoughts into speech. But Dug is mocked as the nerd of the pack. Sent into the jungle on a “special” mission, Dug accidentally succeeds when he discovers the bird following Carl and Russell. As they’re pursued through the jungle by his own pack, the sweet, but simple-minded Dug must decide to which pack he actually belongs.
Game Modes
Up the Video Game features loads of game modes that ensure that players’ Amazonian adventure keeps going and going. Just a few of these include: the Anaconda and Crocodile Boss fights, as well as the 2-4 player Dog Fight mode. Key Game Features Explore Exciting Environments – Explore jungles, caves, rock formations and Paradise Falls while avoiding dangerous plants and animals along the trail. Battle Dangerous Creatures – Compete in aerial dogfight flight combat, evade dangerous dogs in dog chases and take part in large boss fights with exotic animals like crocodiles and anacondas. Multiplayer Support Through the Entire Game – Play by yourself or with a friends in 2-4 player multiplayer. Each character has special abilities to help the player in their quest. Overcome Obstacles – Including rock formations, dizzying heights, raging rivers and weather challenges. Find and Collect – Collect rare bugs, merit badges, and lost items from Carl’s house and Ellie’s adventure book to unlock cheats, bonus content, and bonus movies. Conquer the Environment – Overcome hazards, move boulders, jump on teeter-totters and swing on vines to progress through the game. Hours of Gameplay – 11 levels of gameplay across six environments.