Experience The Beatles music and legacy like never before, utilizing the core Rock Band game play. “The Beatles: Rock Band” in an unprecedented, experiential progression through and celebration of the music and artistry of The Beatles. The game will allow fans to pick up the guitar, bass, mic or drums and experience The Beatles extraordinary catalogue of music through game play that takes players on a journey through the legacy and evolution of the band’s legendary career. The world’s leading music game meets the greatest band in history. The Beatles: Rock Band gives fans what they’ve been waiting for: a chance to experience the Beatles’ legendary story from the inside. In The Beatles: Rock Band you won’t just watch and listen as The Beatles make rock history, create landmark records and conquer the world-for the first time, you’ll be part of the band. The Beatles software is compatible with Rock Band, Guitar Hero and most other instrument controllers, as well as third party microphones including SingStar and Lips. .caption { font-family: Verdana, Helvetica neue, Arial, serif; font-size: 10px; font-weight: bold; font-style: italic; } ul.indent { list-style: inside disc; text-indent: -15px; } table.callout { font-family: verdana; font-size: 11px; line-height: 1. 3em; } td.vgoverview { height: 125px; background: #9DC4D8 url(https://images-na.ssl-images-amazon.com/images/G/01/electronics/detail-page/callout-bg.png) repeat-x; border-left: 1px solid #999999; border-right: 1px solid #999999; padding-left: 20px; padding-right: 20px; padding-bottom: 10px; width: 250px; font-family: verdana; font-size: 12px; } 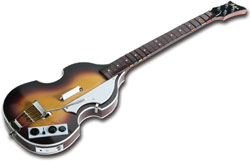 Exclusive Beatles controllers available.
View larger. The Game
Join John, Paul, George and Ringo on-stage at legendary shows, behind closed doors in the recording studio, and in dreamscapes that bring the psychedelic imagery of the latter stage of their career to life. The acclaimed Rock Band elements of interactive play and full-band capacity are here as well, but with brand-new additions. One of these is full three-part harmonies, which challenge you to recreate The Beatles’ vocal blend  a first for any music game and facilitated by the game’s support for up to three microphone controllers. In addition, the game supports custom-built controllers modeled after the actual instruments that the Fab Four played, and eventually helped to make iconic, audio straight from the masters and graphics that take you on a magical tour through the key moments in The Beatles history. Produced with the full cooperation of The Beatles and Apple Corps, the game is packed with hidden fab extras that will push you and up to five of your friends to master the songs both online and offline in order to hear rare audio and view unseen photos from the archives. The Song List
The Beatles were one of the most prolific bands of all time, churning out memorable hit after hit and this is reflected in the song list of The Beatles: Rock Band. From “I Want to Hold Your Hand” to “Get Back,” every song in The Beatles: Rock Band comes directly from the Abbey Road master tapes. More than 40 songs are included with the game, spanning the length of The Beatles’ career, with more to follow via download at the in-game The Beatles: Rock Band Music Store for Wii, using Wii points purchased through the Wii Shop Channel. The full list of hits supplied with the game disc include: I Saw Her Standing There Boys Do You Want To Know A Secret Twist And Shout I Wanna Be Your Man I Want to Hold Your Hand A Hard Day’s Night Can’t Buy Me Love I Feel Fine Eight Days A Week Ticket To Ride Day Tripper Drive My Car I’m Looking Through You If I Needed Someone Paperback Writer Taxman Yellow Submarine And Your Bird Can Sing Sgt. Pepper’s Lonely Hearts Club Band With a Little Help from My Friends Lucy in the Sky with Diamonds Getting Better Good Morning Good Morning I Am The Walrus Hello Goodbye Revolution Back In The USSR Dear Prudence While My Guitar Gently Weeps Birthday Helter Skelter Hey Bulldog Don’t Let Me Down Come Together Something Octopus’s Garden I Want You (She’s So Heavy) Here Comes The Sun Dig A Pony I Me Mine I’ve Got A Feeling Get Back Within You Without You / Tomorrow Never Knows The End The Instruments
Although The Beatles: Rock Band supports instruments from previous Rock Band and Guitar Hero releases on the same gaming platform, it also is tailor-made for play using The Beatles: Rock Band exclusive line of instrument controllers (sold separately). Each member of The Beatles had a signature instrument(s) that became synonymous with them. Controllers available are precise replicas of those instruments and include: John Lennon’s – Rickenbacker 325 guitar Sir Paul McCartney’s trademark – Höfner bass George Harrison’s – Gretsch Duo Jet guitar Ringo Starr’s – Drums with classic black oyster pearl finish and Ludwig-branded Beatles kick drum head The Gameplay Venues
Having made music together in various capacities and combinations for more than ten years, The Beatles career is inextricably linked with a variety of venues. Follow The Beatles from their earliest days in locales in Liverpool and Hamburg, to their triumphant Ed Sullivan Show appearance and beyond. In addition, join them in the studio at Abbey Road and experience dreamscapes that put you inside the psychedelic era. Just a few of the famous venues players can expect to see in the game are: Cavern Club, The Ed Sullivan Theater, Shea Stadium, Budokan, Abbey Road, Rooftop, And many more.