In Scooby-Doo! First Frights, the complement to the upcoming live-action and CGI Warner Bros. DVD release Scooby Doo: The Mystery Begins, players take on the role of young Scooby-Doo and teenage versions of the newly formed Mystery, Inc. crew to solve their very first cases. Scooby-Doo! First Frights is intended for Scooby-Doo fans of all ages. Fans will be able to explore spooky environments as Scooby, Shaggy or any of the super-cool teen Mystery, Inc. team. The action-adventure game features co-op play allowing two members of Mystery, Inc. to work together to solve puzzles, combat enemies, and collect clues before unmasking each episode’s mysterious villain – all while gaining prestige as world famous sleuths! Once players have solved the mystery, they can return to completed levels in Explore mode with any unlocked character, costumed character or villain to access new areas. With ghosts and ghouls around every corner, high school has never sounded so fun! Scooby-Doo! First Frights is a 3D action platformer and companion game to “Scooby-Doo! The Mystery Begins,” a live-action prequel to the original series which releases on DVD and on the Cartoon Network in Fall 2009. Filled with the same hair-raising, yet family-friendy fun that has made the Scooby-Doo! franchise iconic for decades, First Frights is a fresh take on an old favorite featuring multiple game modes, a co-op play option, and a young version of Scooby, and teenage representations of all your other favorite Mystery, Inc. characters. .caption { font-family: Verdana, Helvetica neue, Arial, serif; font-size: 10px; font-weight: bold; font-style: italic; } ul.indent { list-style: inside disc; text-indent: -15px; } table.callout { font-family: verdana; font-size: 11px; line-height: 1. 3em; } td.vgoverview { height: 125px; background: #9DC4D8 url(https://images-na.ssl-images-amazon.com/images/G/01/electronics/detail-page/callout-bg.png) repeat-x; border-left: 1px solid #999999; border-right: 1px solid #999999; padding-left: 20px; padding-right: 20px; padding-bottom: 10px; width: 250px; font-family: verdana; font-size: 12px; }

Story
In Scooby-Doo! First Frights players witness the roots of Mystery Inc. as the gang unites for the first time to solves some of its first mysteries. The story picks up right where the DVD/Cartoon Network leaves off as Scooby, Shaggy and the rest of the super-cool teen Mystery, Inc. gang explore spooky environments, solve puzzles, combat enemies and collect clues to unmask devious villains and gain prestige as world famous sleuths. With ghosts and ghouls around every corner, high school has never sounded so fun. 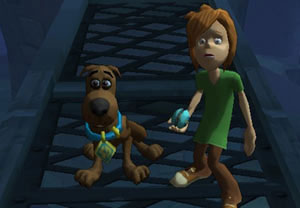 Explore the beginnings of Mystery, Inc..
View larger. Gameplay
An action platformer spread over 22 levels, Scooby-Doo! First Frights challenges the player to utilize the unique strengths, abilities, weapons, and other items of each member of Mystery, Inc. through a series of adventures and puzzle-solving scenarios. The game features game modes such as Storyline and Freeplay, as well as single player and drop in/out two-person co-op play options. The co-op option is an important feature due to each character’s unique skill set which can be utilized better depending on who they are paired with. In addition, this functionality allows more experienced players, like parents or an older child, to share the adventure with younger or less experienced players, with each taking the lead as they wish. Along with these features the game also contains additional features such as charged attacks, voice talent from the “Scooby-Doo! The Mystery Begins” release, and character powerups that are sure to please both kids and their parents alike. Key Game Features Extend the movie experience as you take Mystery, Inc., through its first cases and view clips from the film. Four all-new mysteries spread over 22 levels. Explore the Phantom Cruise Ship, Haunted High School, Foreboding Castle and more. Disguise yourself in a variety of super-powerful costumes unique to each character to gain abilities and weapons. Play with anyone, wherever you are in the game, via two player co-op with easy drop-in, dropout functionality. Enjoy hours of entertainment with Storyline and Freeplay modes.
Additional Screenshots: 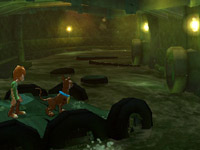 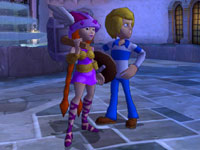 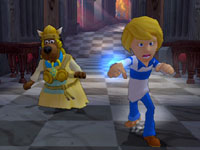 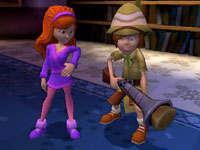