Let the Wii Remote controller be your bat as you join Mario, Luigi, Peach, and the rest of the gang in a rocking, socking, baseball extravaganza! Simple, Active Controls! Newcomers to gaming or sports titles will be up and running on Mario Baseball in no time. Simply swing the Wii Remote to smack a home

Let the Wii Remote controller be your bat as you join Mario, Luigi, Peach, and the rest of the gang in a rocking, socking, baseball extravaganza! Simple, Active Controls! Newcomers to gaming or sports titles will be up and running on Mario Baseball in no time. Simply swing the Wii Remote to smack a home run, or use a pitching motion to toss the ball over the plate. Experienced gamers can also attach a Nunchuk controller for a deeper play experience. Play Ball…With Friends! Two, three, or four players can pick up Wii Remote controllers and challenge each other to a full baseball game or compete in a whole host of baseball-themed minigames. There’s even a home run hitting contest! Live the Baseball Adventure! Mario Super Sluggers boasts over 30 playable characters, all Nintendo favorites. The single-player adventure mode allows the player to explore Baseball Island, tackle dozens of fun baseball challenges, and unlock new characters that can be used in any mode. You can also play with your Miis in Exhibition, Toy Field, and Minigame modes.Whether a diehard fan of the Grand Old Game, or someone who has never even seen a ball, bat or glove in your life, Mario Super Sluggers turns your living room into a rocking, socking baseball extravaganza. Staring the ever-lovable Mario and over 40 of his friends from the Nintendo universe, Mario Super Sluggers builds on the social-gaming fun and movements millions have learned from playing Wii Sports and turns even newcomers to gaming or sports titles into full-fledged baseball fanatics in a matter of minutes. 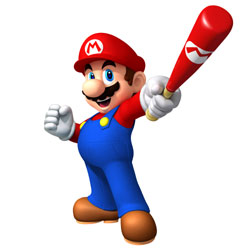 Come to bat as a captain Mario.
View larger.

Be ready to bring the heat.
View larger.

Prepare for fielding challenges.
View larger. Gameplay
Set in the diverse environments of ‘Baseball Kingdom,’ this is a game that is easy to learn and compulsively addictive, but that also can be made to be as challenging as you want it to be. When you are a rookie go on the offensive by swinging the Wii Remote to smack singles, doubles, triples or even home runs; while when playing defense simulating a pitching motion to toss the ball over the plate. As you grow more confident in your skills, you can choose to attach a nunchuck controller while playing defense to control outfielders for an extra challenge. And regardless at what level you play at always remember that Mario Super Sluggers’ nine mini-games are always an option. So, when you need a break from organized play, just grab a few friends and take the mound in a pitching challenge or swing for the fences in the home run derby. In addition, since Mario Super Sluggers supports up to four players, with enough controllers, you can go two on two in epic battles. As you traverse the Baseball Kingdom, put together your “all star” team made up of your favorite Nintendo characters including the games five captains. Each of these has different abilities and temperament making them as valuable as they are difficult in the right or wrong situation. The result is a take on the American Pastime that you and your family will have a hard time putting down. Multiple Game Modes
Baseball should be a social game, so whether you are by yourself or surrounded by friends, there’s a Mario Super Sluggers game for every occasion. Challenge: Trek across Baseball Kingdom in this singleplayer. mode. Defeat characters in a variety of baseball-related challenges to persuade them to join your team. Once you’ve assembled an all-star team for the ages, throw down with the baddest baseballer in town: Bowser! The singleplayer. Challenge Mode is a sports fan’s dream. Explore the rich and varied landscape of Baseball Kingdom as you gather teammates for your fight against Bowser. From lush tropical jungles to modern urban landscapes, each area of the kingdom is a new experience. Like high-powered free agents, the characters in Mario Super Sluggers won’t join just any old team-they want to play for a winner. When you find a new character, he or she will test your skills on the field. Only by besting them in hitting, pitching and fielding contests can you get them to join your side. In Challenge Mode, you can control one of five captains, each with personal special powers. Yoshi can jump through manholes, Wario has the power of magnetism and Donkey Kong can climb vines and shatter barrels. Exhibition: Hit the field and try your luck with a team of your choice. You can play against either the computer or up to three other players. Mini-game: Challenge yourself or take on up to three other players in nine mini-games. From home run contests to pitching duels, you’ll have more fun than a rookie at his first spring training. Toy Field: Battle against three other players in a hitting and fielding extravaganza. You can set your turn limit and the skill level of your computer opponents, or just play against friends. Training: Learn the ropes in an extensive tutorial mode. Special Powers, Weapons, Moves & Features
Mario Super Sluggers isn’t your typical baseball game. From special moves to obstacle-filled stadiums, there’s always something new around the corner for players on the field to deal with. Just a few of the goodies you’ll find out on it’s fields of play are: Special Moves: All of the captains have unique Star Skills that allow them to perform special moves while pitching or batting. Mario can turn his fastball into a fireball, Daisy can create a flower garden in the outfield and Luigi can turn infield hits into a raging tornado. Non-captains can also use Star Skills to put a little extra mustard on hits or pitches. Chemistry: Just as in real sports, certain characters in Mario Super Sluggers have a special connection on the field. Known as chemistry, this connection allows players to make spectacular leaping catches, gun down speedy base runners and use items to interfere with fielders. Stadiums: There are nine unique stadiums in the game, everything from an ice-filled castle to an urban cityscape. Many stadiums can be accessed at both day and night, allowing you to play a doubleheader under the lights. Wii Nunchuk: Experienced gamers can also attach the Nunchuk controller for a more advanced gaming experience.