Nintendo Mario Kart with Wheel Wii RVLRRMCE 1125 Drivers, start your engines! Nintendo is bringing Mario and his friends with their finely tuned racing machines back and this time to the Nintendo Wii. With 3 different control styles and a Wii Wheel included in the box, Mario Kart Wii is bound to be the best

Nintendo is bringing Mario and his friends with their finely tuned racing machines back and this time to the Nintendo Wii. With 3 different control styles and a Wii Wheel included in the box, Mario Kart Wii is bound to be the best in the series. The worldwide race is on with a whole new set of tricks, tracks, and ways to play! Place first in Grand Prix circuits or clear skill-based missions. Mario Kart Wii draws on courses and battle arenas from every game in the series ? not to mention tons of new ones ? the true king of the Mushroom Kingdom racing circuits will finally be crowned. 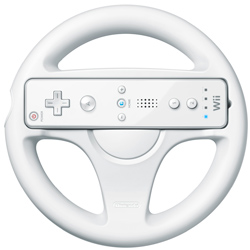 Cool new car designs
View larger.Mario and his friends are back and ready to race once again in Mario Kart Wii! Experience new tracks, enhanced Wii graphics, extraordinary gameplay and much more! Place first in Grand Prix circuits or clear skill-based missions to open up increasingly difficult and thrilling circuits. Players can have multiplayer races on any open courses or battle in arenas. Also included with Mario Kart Wii is the Wii Wheel! Now you can feel like your Mario and steering to avoid obstacles and doing incredible stunts – in the safety of your home of course.

Game Features:The Wii Wheel transforms the Wii Remote™ controller into a steering wheel that feels natural in anyone’s hands, while the Wii Remote and Nunchuk™ controller offer a classic control style for the Mario Kart veteran. In either configuration, players can perform speed-boosting tricks with a shake of the Wii Remote.Players can race as their favorite Nintendo character, or even as themselves! Mario Kart Wii lets players race with their personalized Mii™ characters. And racers will see other Mii characters they have created cheering from the sidelines on some race courses.Players can compete with up to three friends in their living room. Or challenge up to 11 opponents via Nintendo Wi-Fi Connection in the biggest Mario Kart race yet. All tracks and modes of play are available via Nintendo Wi-Fi Connection, and players can visit the Mario Kart Channel to compete in tournaments, check rankings, see when their friends are playing and download ghost data.Cruise new tracks and arenas or tour classic courses from Super Mario Kart™, Mario Kart® 64, Mario Kart®: Super Circuit™, Mario Kart®: Double Dash!!™ and Mario Kart® DS. Tired of riding on four wheels? Bust out one of the new motorbikes for special tricks and techniques.

Characters
Nintendo favorites Mario™, Luigi™, Peach™, Yoshi®, Donkey Kong®, Wario™, Bowser™ and Toad™, plus a host of new faces-including your own! Get into the game and put your Mii™ character behind the wheel.

Special Powers/Weapons/Moves/Features
Whether racing around an obstacle-filled track or battling in an arena, drifting and tossing items are the keys to Mario Kart success. Players can shake the Wii Remote while launching off a ramp to pull off a trick that will temporarily boost their speed. When riding a bike, players can gain additional speed by flicking the Wii Remote up and popping a wheelie