God of War: Collection A must-have for action/adventure fans on the PlayStation 3 platform, the God of War Collection features both PlayStation 2 single player classics, God of War and God of War II. Remastered in high definition and re-released for play on the PS3 this collection allows both longtime fans of the series and 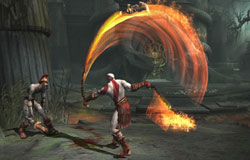 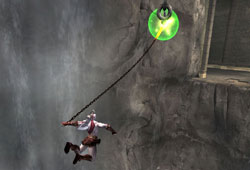 Huge baddies and boss battles.
View larger. The God of War Saga Now for the PS3
The God of War series, made up of God of War and God of War II, featuring the brutal yet tortured anti-hero Kratos, engrossing storylines based in Greek mythology, over-the-top addictive action and puzzle-solving gameplay and simple controls is often referred to as one of the best, and/or most popular single player action games series ever made for PlayStation 2. The truth in this can be seen in the fact that in an era dominated by more advanced game consoles, fans of the franchise who have held on to their PS2’s still revisit these two games from time to time, while gamers who missed their initial releases are tempted to give them a try, even though they have moved on to a PS3. Regardless which side of this you find yourself on the God of War Collection holds something for you. Released in advance of the highly anticipated God of War III, the first game in the series developed for the PS3 platform and rumored to also be the last overall, this collection allows players to properly prepare themselves for the final chapter in the adventures of Kratos, entirely through their PS3. The Games God of War
Unleash the power of the gods and embark on a merciless quest as Kratos, an ex-Spartan warrior driven to destroy Ares, the God of War. Armed with the lethal double chainblades known as the Blades of Chaos, Kratos must carve through mythology’s darkest creatures — including Medusa, Cyclops, the Hydra and more, while solving intricate puzzles in breathtaking environments. Driven by pure revenge, nothing can stop Kratos from achieving absolution. Over time, Kratos becomes the most vicious warrior in Ancient Greece and bathed in blood to a point where he can’t bare it anymore and sets out on a journey to kill Ares. However, the only way to destroy Ares is to find Pandora’s Box, which is located in a temple that’s perched upon a hill and guarded by traps, puzzles, enemies, etc. The story is told as a flashback of three weeks prior to where the opening movie cutscene starts and then sets the stage for the game. God of War II
God of War saw Kratos, a mortal warrior, set upon an epic quest to dethrone a god. But his journey did not end there. In God of War II, Kratos, the once mortal warrior turned ruthless god, sits atop his throne on Olympus, and is a threat far worse than his predecessor Ares had ever been, striking down anyone who crosses his path, or the path of his beloved Sparta. Filled with power and rage, the “Ghost of Sparta” sets out to alter that which no mortal or god has ever changed  his fate. Facing mythical characters, all bent on preventing him from reaching his goal, Kratos’ journey brings him to the very edge of the Earth. But this is Kratos, and his defiance is filled with such arrogance and contempt that all of the ancient world still trembles at his name: Kratos, The God of War. Key Game Features God of War and God of War II on one Blu-ray Disc. Remastered in high-definition at a resolution of 720p. Anti-aliased graphics for 60 frames per second gameplay. Full PlayStation Network (PSN) Trophies support for each game. Purchase includes a PSN voucher for the God of War III E3 2009 Demo.