Pushing the boundaries of what fans have come to expect from the record-setting entertainment franchise, Call of Duty: Black Ops II propels players into a near future, 21st Century Cold War, where technology and weapons have converged to create a new generation of warfare.

Call of Duty: Black Ops II is a First-Person Shooter (FPS) that revolves around unique gameplay that propels the Call of Duty franchise into a world of future warfare, and back again to the modern era. The game is a sequel to the 2010 release, Call of Duty: Black Ops, and features returning Black Ops characters Sgt. Frank Woods and Agent Alex Mason, joined by a wealth of new characters. Additional features include: two distinct yet linked playable time periods, advanced weaponry, branching storylines created by player choices in Strike Force missions, exciting multiplayer options, and more. 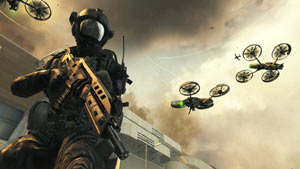 Pushing the boundaries of what fans have come to expect from the record-setting entertainment franchise, Call of Duty: Black Ops II propels players into a near future, 21st Century Cold War, where technology and weapons have converged to create a new generation of warfare between old and new foes. In this conflict, the mechanized creations of men reign supreme, facing off against each other as their creators stay safe and unconflicted, and in the process grow ever softer. In this scenario an important question will be asked: What happens when enemy steals the keys? To understand such a possible future, you must understand where you have been.

Players of Call of Duty: Black Ops II gain an understanding of this and more through the game’s additional timeline set in the late Cold War era of the 1980’s. Within the campaign story, which spans these two eras, players will see familiar faces such as Alex Mason, his son David Mason, and Sgt. Frank Woods. Linking these together will be the rise of another player in the conflict, Raul Menendez.

An all-new Call of Duty: Black Ops storyline featuring new characters and and returning characters A unique single-player campaign that contains two time periods linked by characters and their actions Special Strike Force missions, in which the players action affect the outcome of gameplay and the overall campaign A variety of multiplayer modes and play options

Tranzit
1-4 player co-op in a large open world with a variety of locations. The new Buildables gameplay elements help players move through each area to find the key tidbits that reveal why they are there and what they must do to survive. All the while, public transportation is still operational, as a bus will regularly stop at each location. Zombies ride for free.

Grief
You and friends can take on up to 4 people in a team vs. Zombies vs. team scenario. 2-8 players are thrown in a situation to be the last humans standing.

MP Technology with Zombies: Call of Duty: Black Ops II features new and extensive stat tracking as well as leaderboards for bragging rights. New skill-based matchmaking system will allow players of the same ability to take on the horrors of the night in public game modes. For players that are looking for an extra challenge, Zombies features custom games: Headshots only, higher starting rounds, and toggling of extra items are all available. 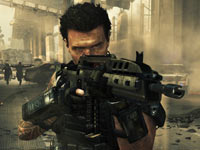 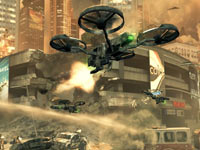 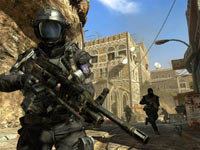