Set in the shattered subway of a post apocalyptic Moscow, Metro 2033 is a story of intensive underground survival where the fate of mankind rests in your hands. In 2013 the world was devastated by an apocalyptic event, annihilating almost all mankind and turning the earth’s surface into a poisonous wasteland. A handful of survivors

Set in the shattered subway of a post apocalyptic Moscow, Metro 2033 is a story of intensive underground survival where the fate of mankind rests in your hands. In 2013 the world was devastated by an apocalyptic event, annihilating almost all mankind and turning the earth’s surface into a poisonous wasteland. A handful of survivors took refuge in the depths of the Moscow underground, and human civilization entered a new Dark Age. The year is 2033. An entire generation has been born and raised underground, and their besieged Metro Station-Cities struggle for survival, with each other, and the mutant horrors that await outside. You are Artyom, born in the last days before the fire, but raised Underground. Having never ventured beyond your Metro Station-City limits, one fateful event sparks a desperate mission to the heart of the Metro system, to warn the remnants of mankind of a terrible impending threat. Your journey takes you from the forgotten catacombs beneath the subway to the desolate wastelands above, where your actions will determine the fate of mankind. Metro 2033 is a gripping, atmospheric first person shooter experience powered by cutting edge technology to deliver incredible visuals. Witness the everyday horrors of a broken society living in constant fear. Brave the darkness of the tunnels, where mutants hunt their prey and ghostly spirits lurk. Explore the desolate city-surface, trusting your gas mask and rifle to protect you from a poisoned world and the creatures that roam there. Steel your nerve and prepare to face the terrors that await. Metro 2033 is a single player first-person shooter (FPS) that incorporates role-playing game (RPG) elements. Based on the best selling novel of the same name by Dmitry A. Glukhovsky, it tells the story of humanity’s struggle for survival in the forgotten tunnels of Moscow’s underground subway system following a devastating nuclear war. Features include mission play combining a unique mix of firearm and melee combat, an economy revolving around ammo and items and an experience system which takes each of your actions into account, leading to a variety of possible alternate endings and extended replay value. .caption { font-family: Verdana, Helvetica neue, Arial, serif; font-size: 10px; font-weight: bold; font-style: italic; } ul.indent { list-style: inside disc; text-indent: -15px; } table.callout { font-family: verdana; font-size: 11px; line-height: 1. 3em; } td.vgoverview { height: 125px; background: #9DC4D8 url(https://images.amazon.com/images/G/01/electronics/detail-page/callout-bg.png) repeat-x; border-left: 1px solid #999999; border-right: 1px solid #999999; padding-left: 20px; padding-right: 20px; padding-bottom: 10px; width: 250px; font-family: verdana; font-size: 12px; }

Story
The apocalypse came by our own making, with a single blinding flash, followed by a firestorm of sheer flame. It took just an hour and a half to wipe out 3.5 billion people and 10,000 years of civilization, plunging humanity into a hopeless Dark Age. In the aftermath, survivors in Moscow moved underground and slowly organized into small socially and politically independent tribes, clustered around the city’s deep, subway stations. The young man, Artyom is among them. A member of the first generation of children raised in the subterranean world following the apocalypse, he has only the vaguest recollections of life above ground, and contact with other humans beyond those that inhabit his local station, “Exhibition,” but he will have to face new experiences with both if humanity is to survive. Mutated beasts known as “Dark Ones” are spreading throughout the isolated stations of the Metro, and Artyom has been chosen as the messenger to spread the news of the new peril. 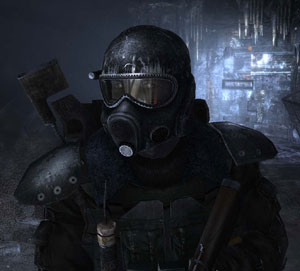 Become humanity’s last savior and uncover the truth behind the horrors that await in Moscow’s underground.
View larger. Gameplay
Metro 2033 is a single player, FPS that also incorporates RPG elements. Action played out in the role of young Artyom, is mission-based and because the game is based on the Glukhovsky novel, the storyline veers away from the anti-Russian stance that is often seen in post-apocalyptic stories and video games. Here the Russian characters are humanity, and fight every day against the terrors that nuclear war has wrought. These terrors come mostly in the form of mutants known as “Homo Novus,” who have invaded the Underground, as well as frightening alien-like paranormal creatures that haunt the gameworld. The game hero, Artyom, has a certain immunity to the latter and a talent for dispatching the former, which together make him a very popular choice to be sent on missions. Combat throughout utilizes a mixture of improvised firearms and melee weapons. Balancing the use of these two is important because in this world of violence and scarcity, ammunition plays the duel role of protection and commodity. Throughout the game players will use ammo as much to purchase items and upgrades at different stations visited, as they will use it in combat. In addition, the choices made by players throughout the game register as “Enlightenment Points,” or the lack of them. Accumulated totals of these register as a variety of constructs such as curiosity, kindness and prejudice resistance that can and will lead to alternative story endings. Together with its unique inventory management system, engrossing storyline and replay value based on morality, Metro 2033 is sure to be a game not to be missed by FPS and RPG players alike. Key Game Features Menacing Atmosphere – Incorporating shadows, ambient sounds, lighting effects and claustrophobic scenes to create feeling of tension and fear DX10 and PhysX delivers the best graphical detailing of a post-nuclear setting to date. Visceral engagement with the game world – fall down broken steps, tunnel race etc. Diversity of Combat – Combat is brutal and intense, fought with improvised weapons or hand to hand in the half shadows. Enlightenment Points – Proprietary engine takes into account your actions and analyzes them (curiosity, kindness, prejudice resistance) leading to alternative story endings. Play through the game using either over-the-top shooter, or calculated stealth techniques, altering the game play style in the progression of the game. Time of No Return – The length of being in hostile environment on the surface is limited, players should take that into account when venturing above ground. Inventory Management – Use ammo to take down the opposition or save it to purchase upgrades. Cartridges replace cash, Gadgets are gold (gas masks). RPG Light Story – Encounter NPC’s via engaging and trading activity across the various ‘Station States’, each with its own social system. Additional Screenshots: 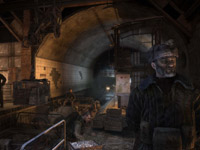 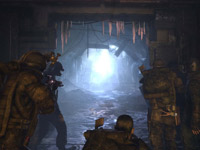 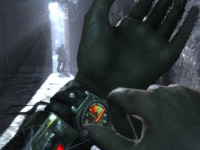 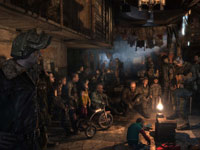 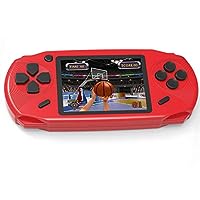 (12752)
23% Off $45.98 $34.98 (as of August 18, 2022 12:03 GMT -06:00 - More infoProduct prices and availability are accurate as of the date/time indicated and are subject to change. Any price and availability information displayed on [relevant Amazon Site(s), as applicable] at the time of purchase will apply to the purchase of this product.)
🚀New Styles and Games：The appearance of this game console is brand new. Built-in 100 new exciting educational puzzle casual games. And while kids having fun, they're exercising important developing skills too, like hand-eye coordination, and thinking... read more 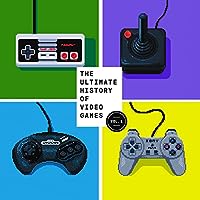 The Ultimate History of Video Games, Volume 1: From Pong to Pokemon and Beyond . . . The Story Behind the Craze That Touched Our Lives and Changed the World

(144)
30% Off $12.98 $8.99 (as of August 18, 2022 12:00 GMT -06:00 - More infoProduct prices and availability are accurate as of the date/time indicated and are subject to change. Any price and availability information displayed on [relevant Amazon Site(s), as applicable] at the time of purchase will apply to the purchase of this product.)
Factory sealed DVD 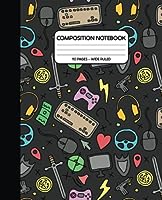 $5.99 (as of August 18, 2022 08:14 GMT -06:00 - More infoProduct prices and availability are accurate as of the date/time indicated and are subject to change. Any price and availability information displayed on [relevant Amazon Site(s), as applicable] at the time of purchase will apply to the purchase of this product.) 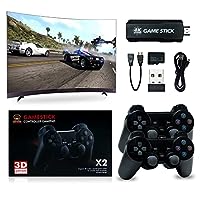 (1)
$54.99 (as of August 18, 2022 08:17 GMT -06:00 - More infoProduct prices and availability are accurate as of the date/time indicated and are subject to change. Any price and availability information displayed on [relevant Amazon Site(s), as applicable] at the time of purchase will apply to the purchase of this product.)
Rich Classic Games: 20+ emulators & 20,000+ classic games are pre-installed in this Wireless Retro Game Console.With the upgrade powerful 905X chip, it is compatible with most emulators smoothly without frame drop issues. Enjoy 4K HD Display: The ret... read more
The owner of this website is a participant in the Amazon Services LLC Associates Program, an affiliate advertising program designed to provide a means for sites to earn advertising fees by advertising and linking to Amazon properties including, but not limited to, amazon.com, endless.com, myhabit.com, smallparts.com, or amazonwireless.com.