Many years have passed since the darkness of Damians armies was repelled and Damian was banished into another realm by mans Demigod hero, the Divine. While men enjoy their first years of real peace, Damian breaks free from his bonds and returns to the world of Rivellon to take vengence on he who imprisoned him.

Many years have passed since the darkness of Damians armies was repelled and Damian was banished into another realm by mans Demigod hero, the Divine. While men enjoy their first years of real peace, Damian breaks free from his bonds and returns to the world of Rivellon to take vengence on he who imprisoned him. To do so Damian takes control of the minds of the worlds rarest and most power beings: The Dragon Knights, whom he unleashes on to the world. It is one of them who kills the Divine. With the dragons now on the side of evil, many young men and women of Rivellon have taken up the role of ridding the world of these dragons – they are known as Dragon Slayers Divinity II: Ego Draconis is a single player role-playing game (RPG) and third game in the Divinity series. Divinity II features a classless character system, designed to allow ultimate flexibility to any created character with the right level and distribution of experience points. Also featured are a choice-based storyline, the ability to fight in human and dragon form, control of composite creatures formed from parts of defeated enemies and powerful strongholds called Battle Towers that can be transported to in time of need. .caption { font-family: Verdana, Helvetica neue, Arial, serif; font-size: 10px; font-weight: bold; font-style: italic; } ul.indent { list-style: inside disc; text-indent: -15px; } table.callout { font-family: verdana; font-size: 11px; line-height: 1. 3em; } td.vgoverview { height: 125px; background: #9DC4D8 url(https://images.amazon.com/images/G/01/electronics/detail-page/callout-bg.png) repeat-x; border-left: 1px solid #999999; border-right: 1px solid #999999; padding-left: 20px; padding-right: 20px; padding-bottom: 10px; width: 250px; font-family: verdana; font-size: 12px; } 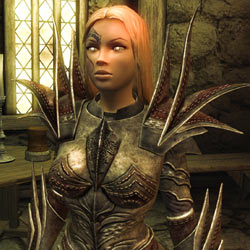 Frightening enemies.
View larger. Story
Divinity II: Ego Draconis brings you back to Rivellon, a timeless world of awe and magic, torn and scarred by successions of apocalyptic wars. Ever since the Great War ended, the Order of the Dragon Slayers has had eyes only for their number one enemy: the Dragon Knights who killed their Divine hero. But all the while the true enemy, the Black Ring, still festers beneath the surface poised to strike, for their leader Damian tirelessly plots silent schemes with utterly malign intent. Then one day, an event takes place that will reshape the history of Rivellon: a dying Dragon Knight gives her powers to a member of the order that seeks to destroy her: you. Perhaps you, blessed as you are with the powers of the Dragon, will be able to stop the black tides that threaten to engulf Rivellon. Many adventures await you, many mysteries yearn to be unraveled and all the world awaits the outcome of your new destiny. Gameplay
Divinity II: Ego Draconis like its predecessors, Divine Divinity and Beyond Divinity, is a single player RPG utilizing the standard system of experience point accumulation to level up characters to meet the growing challenges faced. Except in cases where the storyline requires specific series of events and environments, the game features a seamless gameworld, that for the most part players are free to explore. This along with a moral component to decision making, 20 possible quest solutions and varied non-player character (NPC) reactions makes for gameplay pleasing to any RPG fan. In addition, like Beyond Divinity, Divinity II features a classless character system, where it is possible for any created character, with the right distribution of experience points, to attain the items and/or abilities needed to triumph in virtually any situation faced. This is by design to add flexibility to gameplay. Players of Divinity II also experience flexibility in the game’s mix of aerial and ground-based combat. This is rooted in shape-shifting ability that allows players, once the dragon ability is unlocked, and playing in areas physically permissible to the dragon form, to switch between human and dragon forms at will. Beyond the obvious increase in power, playing as a dragon also allows for special skills and abilities not available to humans, as well as allows you to travel faster and longer distances than possible in your human form. Be warned though, you are also much more visible to enemies. Another pivotal element of gameplay is the Battle Tower. Battle Towers are central structures to which you can teleport at all times — once a tower is yours, that is — using a mystical device called the Dragon Stone. More than that, your tower houses multiple rooms and terraces where different attendants provide a variety of services. Key Game Features Sequel to an Award-Winning RPG Series – Following the lineage of Divine Divinity and Beyond Divinity, Divinity II: Ego Draconis has adapted many of the most famous elements that made these two original games classics. Divinity II: Ego Draconis makes use of the same classless system that was incorporated in Divine Divinity, which allows you to choose your own path as you become a Dragon Knight. Fight as Both a Human and a Dragon – Don’t settle for taming and riding a dragon when you can be the Dragon. For the first time, an RPG unleashes the very power of the Dragon on you. Climb high and vaporize all that stands in your way as you strategically use both your human and dragon forms to defeat Damian and become the ultimate Dragon Knight. Dynamic Choice-Based Storyline – Divinity II : Ego Draconis gives you a wide range of moral choices when deciding on how to act on quest objectives. When you make these choices, the consequences of your actions appear throughout game play. Consequences such as up to 20 possible quest solutions, new quest chains, NPC reactions, vendor pricing and other experience-altering consequences make Divinity II: Ego Draconis very interesting and engaging. Powerful Battle Tower Gameplay Element – Looming like a colossal stone claw over Sentinel Island, stands the Battle Tower, a vast citadel built many centuries ago by Maxos, the Dragon Mage. Become bound to the Battle Tower through a mystical relic known as the Dragon Stone. The Dragon Stone allows you to teleport to the Battle Tower at any moment so that you can utilize the powers within. Build Your Own Ultimate Fighting Creature – Conjure the spirits to bring to life a creature made from body parts you have collected during your battles. This creature’s power is literally the sum of its body parts; the composition of various limbs determines its strengths and abilities. Once you are able to assemble this abomination, you may summon it to support you in combat.