BioShock Infinite is a first-person shooter like you’ve never seen. Set in 1912, players assume the role of former Pinkerton agent Booker DeWitt, sent to the flying city of Columbia on a rescue mission. His target? Elizabeth, imprisoned since childhood. During their daring escape, Booker and Elizabeth form a powerful bond — one that lets

BioShock Infinite is a first-person shooter like you’ve never seen. Set in 1912, players assume the role of former Pinkerton agent Booker DeWitt, sent to the flying city of Columbia on a rescue mission. His target? Elizabeth, imprisoned since childhood. During their daring escape, Booker and Elizabeth form a powerful bond — one that lets Booker augment his own abilities with her world-altering control over the environment. Together, they fight from high-speed Sky-Lines, in the streets and houses of Columbia, on giant zeppelins, and in the clouds, all while learning to harness an expanding arsenal of weapons and abilities, and immersing players in a story that is not only steeped in profound thrills and surprises, but also invests its characters with deep emotional bonds. 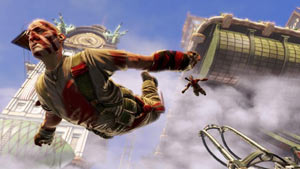 Immersive Story: From BioShock creators Irrational Games comes an all-new chapter of the BioShock story. The year is 1912 and you’re Booker DeWitt, a former Pinkerton agent with his life on the line. His mission: rescue the mysterious Elizabeth from the sky-city Columbia or never leave it alive. But why is everyone so afraid of a young girl? A City in the Sky: The BioShock franchise leaves the depths of the ocean to soar among the clouds in the flying city of Columbia. A technological marvel, it’s a beautiful and vibrant world that has a very dark secret – a secret that not only threatens the existence of Columbia but could change Booker forever. Sky-Lines: Using his Sky-Hook, Booker is able to dish out severe hands-on punishment and traverse the city’s hook points and Sky-Lines, turning them into weaponized roller coasters. Tears: Your traveling companion Elizabeth is more than just a pretty face – she has the power to open Tears in time and space. Booker can use these Tears to shape the battlefield and turn the tide in combat by pulling cover, weapons, turrets, and other resources out of thin air.Vigors: What would a BioShock game be without a variety of devastating powers surging through your body to be unleashed against all that oppose you? From throwing explosive fireballs and lightning to unleashing a murder of crows upon your victims, Vigors let you tailor your play style for maximum effect. New Combat Experience: With deadly weapons in one hand and powerful Vigors in the other, you will fight your way through the floating city of Columbia to freedom. All the while you’ll be capturing zeppelins to destroy all onboard, riding Sky-Lines to launch devastating aerial attacks, and opening world-changing Tears to gain the advantage. You’ve never seen combat like this. Weapons, Tears, Vigors, Sky-Lines – every system in the game can be combined for devastating effect. 1999 Mode: The player can unlock a secret version of the game called “1999 Mode” that gives experienced players a taste of the kind of design and balance that hardcore gamers enjoyed back in the 20th century. AMAZING. Would you kindly play BioShock Infinite? Gameplay and the story combine for a majorly memorable shooter. 9.5/10″ – IGN.com 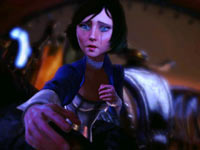 Save Elizabeth & use her powers.
View larger 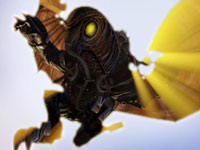 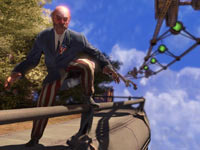 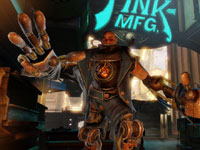